All regular students, all special students and all married students (whether they live on campus or off) are considered as being in residence. This means that not only their academic work, but also their participation in church life, ecclesiastical status, voluntary or paid activities and assignments, as well as any change in condition (marriage, ordination, employment, enrollment in other institutions) are subject to Seminary supervision and approval.

Single students must live in Seminary facilities. Rooms are assigned by the Director of Student Affairs, and students having special needs or preferences should contact him.

Married students live in private facilities of their own choice, but are subject to Seminary regulations concerning Liturgical Services and Choir participation, and, in general, all other requirements applicable to regular students.

The Seminary does not have facilities for health care on campus. Students are referred to area physicians or hospitals as circumstances arise. The Seminary also does not provide a health insurance program for its students. Applicants are therefore urged to give careful consideration to their health needs. 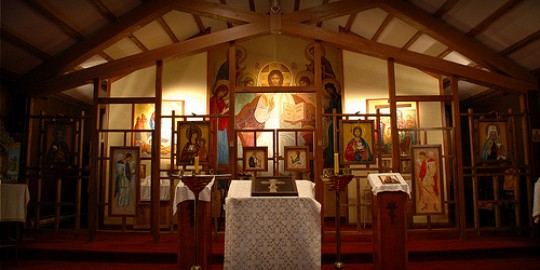 Regular community participation in Liturgical services is at the very center of Seminary life, and participation in the daily, weekly and annual cycles of services is the primary spiritual obligation of every seminarian. At the direction of the Seminary Rector (or whomever he may designate), students are required to take an active part in reading and serving at Liturgical Services.

At St. Tikhon's Seminary, all students are expected to participate in the activities of the Seminary Choir. Therefore, all students are required to report directly to the right klieros (choir) of the Monastery Church unless appointed to assist in the Altar. In addition to singing the responses at all required Liturgical Services, the Choir frequently accepts invitations to sing outside the Seminary in Orthodox parishes, thus providing important contact between the Seminary and the parishes in which students one day may serve.

As worship is an important facet of Seminary life, as well as of Orthodox life in general, each student's participation is regularly reviewed by the Seminary Administration, taking into consideration regular Liturgical participation, competent fulfillment of reading and serving assignments, Choir participation, and basic knowledge of Orthodox liturgical practice. Any deficiencies in these areas may lead to disciplinary action.

In addition, as part of their spiritual formation, every student in residence is expected to be under the spiritual guidance of one of the Seminary (or Monastery) clergy, subject to the approval of the Seminary Administration.

As an act of Christian obedience, as well as service to the Seminary Community, each student in residence is expected to give a portion of his time to work assignments at the Seminary. These responsibilities are assigned by the Community Resource Coordinator and represent a major portion of one of the three foundational elements that make up the formation experience at St. Tikhon's Seminary.

Through its elected officers, the Student Government acts as the official voice of the Student body at St. Tikhon's Seminary. The Student Government sponsors and becomes involved in many charitable projects throughout the year for the benefit of the Seminary, Monastery, local communities and hospitals, and contributes to missions both at home and abroad.

The Orthodox church teaches that theology cannot be separated from normal spiritual life. Thus, it is the policy of St. Tikhon's Seminary that academic effort not be separated from spiritual effort and community life of those who are preparing for the Priesthood, as well as for other areas of Church service. As a seminarian, the student is subject to ecclesiastical regulations, moral standards, and behavioral patterns traditionally expected from those preparing for Church service, established as normative by the Orthodox Church and manifested in the Code of Student Conduct established by the Seminary. Application to the Seminary constitutes agreement to these requirements. Thus, the student is expected to conduct himself as a responsible member of the Seminary community by adhering completely to the code of student conduct during his entire association with the Seminary. Behavior on or off campus, such as breach of discipline, moral lapse, crime, flagrant breach of academic honesty (such as plagiarism), insubordination to authority, or any other action that discredits the individual or the Seminary, may lead to disciplinary probation or, if serious enough, to immediate dismissal. St. Tikhon's Seminary reserves the right to suspend or dismiss by action of the Faculty or its the highest authority (the Rector) any student who fails to comply with Seminary discipline.

Additional information on Seminary discipline is provided in the Student Handbook, which is supplied to all entering students by the Director of Student Affairs.