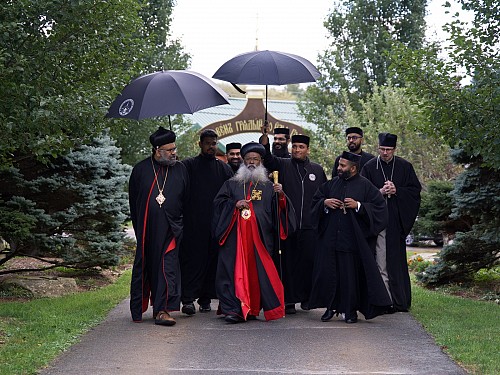 On September 28th, St. Tikhon’s Orthodox Theological Seminary was blessed to have with us His Holiness Moran Mor Baselios Marthoma Mathews III, the Catholicos of the East & Malankara Metropolitan – the Supreme Head of the Malankara Orthodox Syrian Church. His Holiness was accompanied by His Grace Zachariah Mor Nicolovos, the Metropolitan of the North East American Diocese as well as other clergy. His Holiness was received by His Eminence Archbishop Michael, the Rector of our institution as well as the Dean of the Seminary, Very Rev. Fr. John Parker III and other faculty members.

His Holiness' visit to St. Tikhon’s coincided with his first Apostolic Visit to North America following his installation as Catholicos. His Holiness greeted and addressed the entire student body. During his address, His Holiness reminded all those present of our vocation, the realities of working in the Lord’s vineyard in this current day, and how we are to serve God’s people. To celebrate the occasion of his visit, following the address, His Holiness was presented with a special gift by the Dean of the Seminary. In addition to the gift, was the inauguration of the ‘Moran Mor Baselios Marthoma Mathews III Scholarship Fund’ specially set aside for our current and future Malankara students.

During his visit, His Holiness offered incense and intercessory prayers in St. John Chrysostom Malankara Chapel and toured our beautiful campus. His Holiness was delighted to visit the oldest Orthodox Christian monastery in America. He was warmly greeted by the Abbot of St. Tikhon’s Monastery, Archimandrite Sergius. His Holiness offered special intercessory prayers in the monastery Church to the patron saint, St. Tikhon, and was able to venerate the relics of St. Alexis and the Miraculous Icon of St. Anna. Following the tour, His Holiness enjoyed tea and refreshments alongside the faculty and staff.

Special thanks to all the individuals that were involved in the planning and preparations to ensure that His Holiness and all our guests had a wonderful stay!