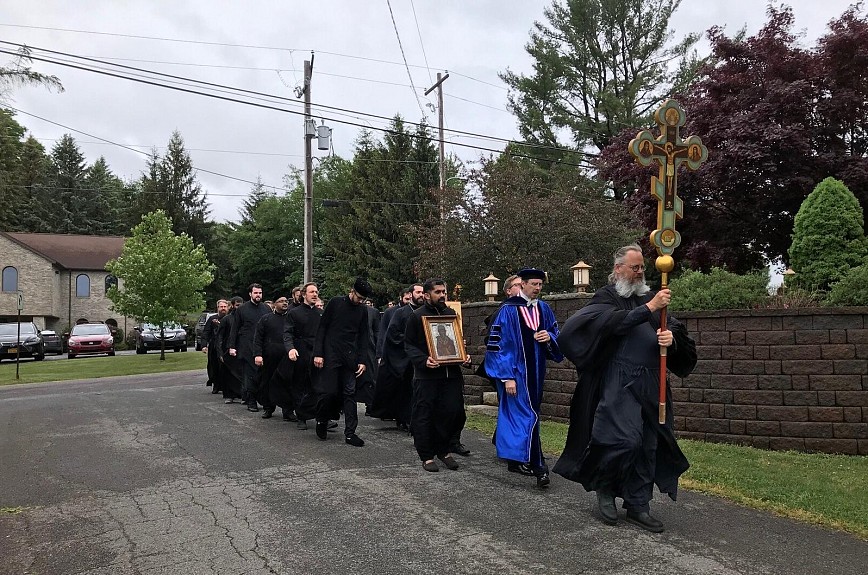 On the evening of Friday, May 28, Saint Tikhon’s Seminary presented the beginning of its 2021 Commencement addresses online. With a prayer and welcome by the Dean, Father John Parker, and with a word of greeting from Michael Herzak, the Chairman of the Board of Trustees, the presentation began. Viewers were treated to an octet beautifully performing the Paschal hymn by former seminary rector, Saint Nicholai of South Canaan: Christ God is Risen! Let us Rejoice! Then, from Ireland, the Commencement Address was presented by Jonathan Jackson, a celebrated actor, author, and singer. Jonathan spoke about Christ at work within the lives of priests and other ministers of the Church, focusing his talk around the works of Saint Patrick, the Enlightener of Ireland. Referencing modern elders and Holy Fathers, Jonathan went on to dramatically emphasize the martyrdom that our life is centered upon, as Christ emptied Himself as a martyr for all creation. Jonathan inspired viewers to transform their suffering into something glorified and ultimately bound to God. Quoting the Patron of Ireland, Jonathan concluded that “‘this is the way we repay God for correcting us and taking notice of us: We honor and praise His wonders before every nation under heaven.’” He then challenged the graduating class to do just this.

Following the announcement of those students who were graduating with honors, the seminary’s Rector, His Eminence, Archbishop Michael, offered encouragement to the graduates; recognizing that the world is mired in sin, His Eminence explained that servanthood to all--including the Lord--is the secret to success as Christian leaders in the fallen world. His Eminence zealously charged the graduating class to “pray faithfully, serve humbly, teach uncompromisingly, preach boldly, evangelize tirelessly, celebrate joyously, and love sacrificially,” imitating the Saints who have been a part of the Saint Tikhon’s community. Father John, after introducing the new format of the Tikhonaire, introduced His Beatitude, Metropolitan Tikhon, who offered the Presidential Address. As President of the seminary, His Beatitude exhorted the graduates to reflect on their experience in seminary in order to see how they have been prepared for their vocations ahead: “In order to truly know Christ, one must know oneself.” Each of the speakers offered prayers for the graduates, and Father John concluded with a reminder that the Lord commands that those whom He sends out are to make disciples of all nations.

Beginning on the morning of Saturday, May 29, a Primatial Divine Liturgy was served in the Monastery Church with two hierarchs, eleven priests, three deacons, numerous servers, a full choir, and a multitude of believers. At the conclusion of the Liturgy, a wonderful brunch was offered to all present, followed by the procession of the graduating class and the dais party into the seminary’s Convocation Hall to the singing of the Paschal Troparion. The in-person ceremony began with a Molieben served by His Beatitude and the newly-ordained Deacon Athanasios Kombos. And after a brief word of introduction from Father John Parker, the class valedictorian was offered the opportunity to speak. Reflecting on how his class had once been described as “sober,” Father Peter Simko discussed the importance of joy in sharing the Orthodox Christian Faith, emphasizing its necessity in living the Life of Christ. The ceremony continued with a presentation by Father Patrick Burns, the Alumni Association President, who conferred the “Alumnus of the Year” awards to Father Yaroslav Sudick, and to the late Father Nicholas Timpko of blessed repose. Next, Father David Hester was honored by the seminary on the occasion of his retirement; he was presented with a newly painted icon of Saint Tikhon of Moscow alongside his patron, King David. The commencement ceremonies concluded with closing words from His Eminence, Archbishop Michael, and His Beatitude, Metropolitan Tikhon, as well as the presentation of the Class of 2021 icon of Christ the True Vine by Ryan Miller, the student body president, and the presentation of a large icon of the calling of Saints Andrew and Peter to the school by Mitch and Jan Vanduyn. Following the conferral of degrees and a gift from Dr. David Ford to each student, a closing prayer gave way to celebrations among everyone in attendance. Congratulations to the STOTS Class of 2021! Many years!

The Program of the 79th Commencement at St. Tikhon's Orthodox Theological Seminary can be found HERE. 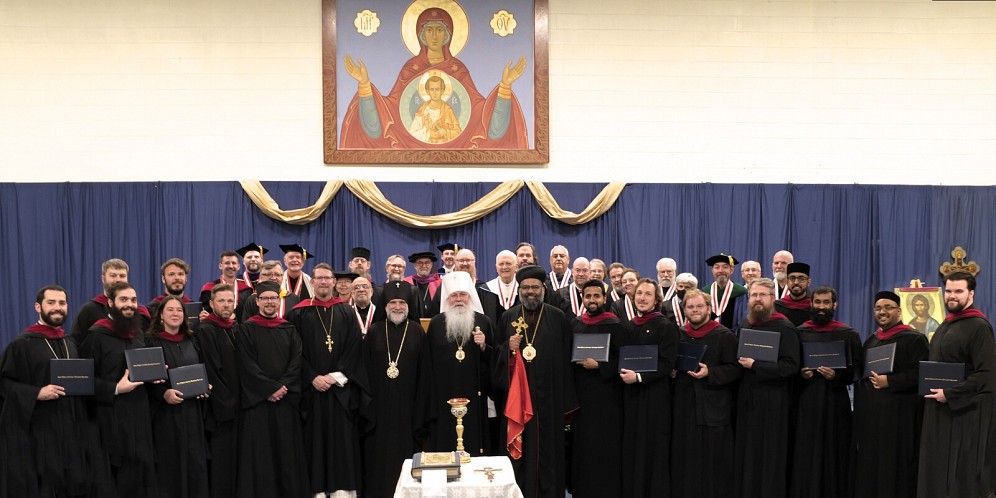