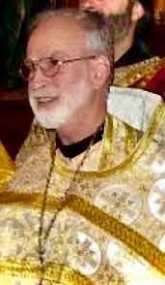 Ordained a deacon in 1971 and a priest in 1972, Father Nilus converted to Holy Orthodoxy in 2006.  He served for a number of years as the Director of Student Life and Instructor at Saint Tikhon’s Orthodox Theological Seminary.

After his retirement from Saint Tikhon’s Seminary, Father Nilus was attached to the Cathedral of the Holy Virgin Protection, Manhattan, NY, where he was an assistant to Archimandrite Christopher (Calin) until his health limited his activities.  He continued on, however, as a father confessor to the parishioners of the Cathedral parish and several Orthodox clergy and faithful in the greater New York City area, until his recent move to an extended care facility.