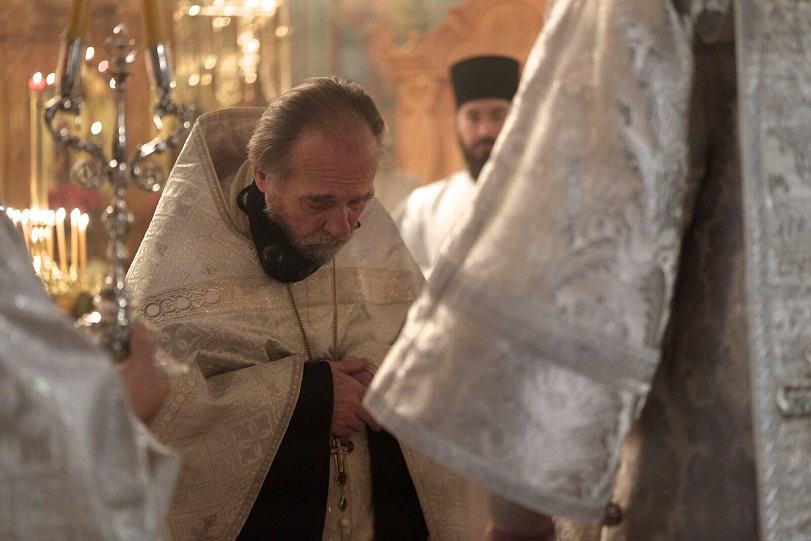 On the Great Feast of the Nativity of the Lord, 2020, the faithful of Saint Tikhon’s gathered to celebrate the birth of Christ, as well as to honor one of their own: Archpriest Daniel Donlick, a faithful priest of the Orthodox Church for over fifty-five years, was led by Archimandrite Sergius, Abbot of Saint Tikhon’s Monastery, and Archpriest John Parker, Dean of Saint Tikhon’s Seminary, to stand before His Beatitude, Metropolitan Tikhon. Father Daniel prostrated, arose, and bowed his head before the hierarch.

Current seminary students easily recognize Father Daniel from his role as the primary confessor at Sunday morning Liturgies and Presanctified Liturgies. Though COVID-19 has complicated things a bit, Father is nevertheless a familiar face.  Walking into the Monastery Church before almost anyone else has arrived, the sound of his footsteps and his white cane--familiar signals of his presence--are almost as comforting as his joy-laden countenance and his greeting to everyone he encounters: “Glory to Jesus Christ!” Father Daniel has served as the spiritual father for a host of seminarians (past and present), but also for parishioners of the Monastery. They go to him knowing that, through his simple ministry, they will have a powerful experience of the Spirit. This is because they can see that Father Daniel has a genuine and pious soul, a soul that desires the Lord. By his counselling, Father conveys living hope to his spiritual children. He encourages each one of them lovingly. He speaks from the heart and he listens with a palpable concern and a focus that is unmistakable. Kneeling at the Panikhida table before the Gospel and the Cross, God’s healing presence and forgiveness are received--and Archpriest Daniel conveys it to each penitent with the prayer of absolution.

But Father Daniel’s ministry extends beyond this service to his spiritual sons and daughters. At the Little Entrance of the Christmas Liturgy, the Metropolitan took the opportunity to give a word of summary about Father Daniel’s contributions to the Church:

“It is my joy and honor to present to you this miter [...] in recognition of your fifty-five years of service as a priest, which you have offered--not only as a priest in the Diocese of Eastern Pennsylvania, serving Olyphant and Jermyn, and being a significant contributor to the mission in Stroudsburg (which now is a thriving parish)--but above all to present this award to you here at the Monastery Church of Saint Tikhon of Zadonsk in the midst of the communities that you have so faithfully served throughout your priesthood, especially as a professor, as the Registrar, and as the [Academic] Dean of Saint Tikhon’s Seminary, wherein you were instrumental in bringing the seminary to achieve [...] accreditation, both on the state level, and with the Association of Theological Schools. But above all, in whatever role you served, you were indeed a Father to those that you served, inspiring them to become good priests, deacons, and lay workers in the vineyard of our Lord. And since your retirement, you also continue that ministry as a confessor and spiritual father for many here in the Monastery Church, especially those who are here to serve as seminarians and are on the path to ordination. In all these things, Father Daniel, you have shown yourself to be full of Christ-like humility, of Christ-like love, and as Saint Paul instructs: you never gave milk, but you always gave solid food to those that [have] come to you for direction and guidance, including the Primate of the Orthodox Church of America, who is here because of your original encouragement to come to seminary and follow the Lord--and not to delay.”

His Beatitude was honored to present Father Daniel’s name to the rest of the Holy Synod as a potential recipient of the miter, the highest award for presbyters in the Orthodox Church in America. The Synod recognized Father’s worthiness and unanimously approved the bestowing of this dignity on Father Daniel. This priest, who has touched so many lives over the course of his vocation, is a 1965 graduate of the seminary he still ministers to as a beloved pastor, mentor, and friend. His myriad contributions continue, and the faithful ministry of the Mitered Archpriest Daniel Donlick, along with his wife, Matushka Dolores, will surely be felt for generations to come. 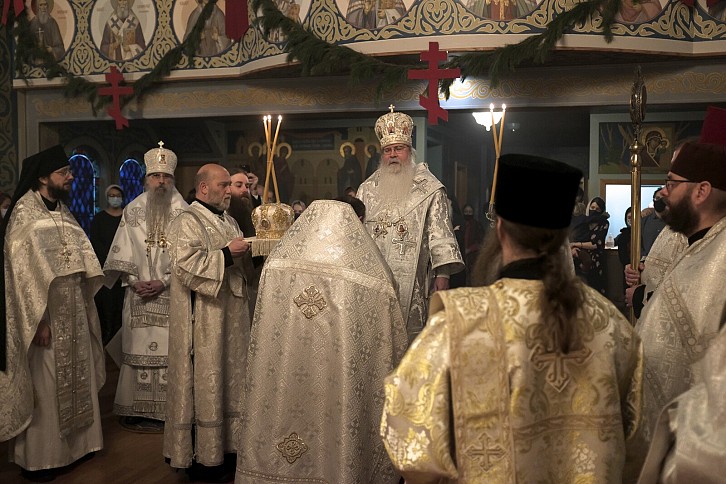