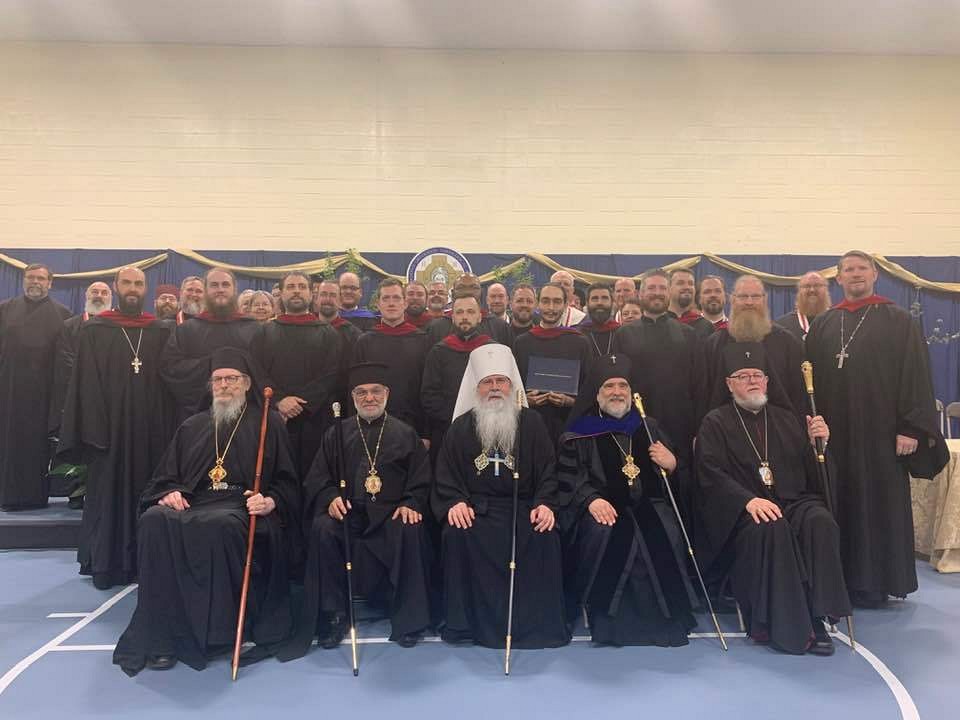 South Canaan, PA – On Saturday, May 25, 2019, Saint Tikhon’s Seminary held its 77th Annual Commencement Exercises, conferring Master of Divinity degrees on 13 graduates and Certificates in Pastoral Formation on 2 others. The joyful assembly began with a procession into the filled, newly-renovated Convocation Center, which housed the very first All American Council of the Orthodox Church in America in 1970.

Very Rev. Archpriest John Parker, Dean of the Seminary, introduced the Class Valedictorian Benjamin Cabe.  In his address, Ben reminded those assembled:  “Often when we think of graduate degrees in theology, we imagine a classroom full of people discussing theological ideas, but this is not the thrust of our education here. God is not an idea; He is a person – and a person can only be truly known through personal contact.”

Seven current graduates and one recent graduate received certification in Clinical Pastoral Education from Very Rev. Archpriest Steven Voytovich, former Dean and director of CPE for the Seminary.  Father John Parker announced those who had graduated with honors:  Benjamin Cabe, with distinction in Theology, and George Davis, with distinction in Church History.

The Commencement Address was delivered by His Eminence, the recently-elevated Archbishop David, a 1997 St. Tikhon’s alumnus.  The ruling hierarch of the Diocese of Alaska exhorted the graduating seminarians to be ever prepared to witness to inquirers, recognizing  the “God Tests” in their lives:

You will have lots of  "God tests" in life, and while you may be done with the classroom, you’re not done with the ‘Living’ room. Every time you are approached by someone with a question about a life subject, you need to be ready to answer the test question.  It may be that you find yourself in a checkout line [and] they may notice you’re a priest….  You’re going to get a God test.  Be ready, be confident, but most of all, be humble.

His Eminence also  fulfill the instruction of St. Herman of Alaska: “From this day, from this hour, from this minute, let us strive above all else to love God and to do His Holy Will” and to keep in mind the words of St. Innocent of Alaska:

It is indeed a holy endeavor, one equal to that of the apostles, to leave your homeland and go to places that are remote, wild, and devoid of many of the comforts of life in order to convert to the path of Truth people who are still wandering in the darkness of ignorance and to illumine with the light of the Gospel those who still have not seen this saving light.  Blessed is he whom the Lord chooses and places in such service!  But especially blessed is he who with all fervor, sincerity, and love struggles to convert and to enlighten, enduring the labors and sorrows met in the course of his service, for great is his reward in the heavens.

During the gathering, St. Tikhon’s Student Government outgoing president Fr. Joseph Sharman presented the “Fr. Alexander Atty Memorial Community Service Award” to retiring Chief Financial Officer Very Rev. Archpriest Dennis Swencki (STOTS 1974), a most beloved member of the St. Tikhon’s Community for many years.  Father Dennis offered a heartfelt and tearful response upon receiving the award, which was given with great love from the graduating class and the entire community he has served for so long.

The Commencement ceremony also included the presentation of the Distinguished Alumnus of the Year Award, as chosen by the members of the Seminary’s Alumni Association.  It was announced by Alumni Association President, Rev. Patrick Burns (STOTS 2009) that this year the award was being presented to two venerable elder priests:  Mitred Archpriest Daniel Ressetar (STOTS 1948) and Very Rev. Archpriest Eugene Pianovich (STOTS 1950), both of whom have been blessed with more than half-a-century of faithful service to Christ’s Church in America.  Two days later, at the Hierarchical Divine Liturgy of the Monastery Memorial Day Pilgrimage, Metropolitan Tikhon awarded Fr. Pianovich the privilege to wear the miter.

On Saturday evening, following the Vigil service at the Monastery Church, some two hundred persons attended a banquet, held at the Anthracite Center in Carbondale, honoring the 15 graduates of the St. Tikhon’s Class of 2019.  The speaking program focused on reflections by the students of their time together, being spiritually formed and theologically educated at the Monastery and Seminary.