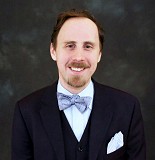 Marshall Goodge (STOTS Class of 2017) is beginning his new role as Administrative Assistant to the Dean.

Archpriest Steven Voytovich, Seminary Dean, stated: "I am excited about these changes that are already making a difference in the life of the Seminary!"

We also offer prayerful best wishes to those who are leaving their positions at the seminary:

Sergei Arhipov retired after graduation in May.  Though he will no longer be Registrar, he will continue on a part-time basis as Librarian.

Teresa Vaux Michel moved across the street to begin her duties at St. Tikhon's Monastery Bookstore.

Seraphim Danckaert left the seminary in July to become the Executive Director of FOCUS.

May God grant many years to the servants of God Paul and Marshall, and Godspeed to Sergei, Teresa, and Seraphim toward their next endeavors.