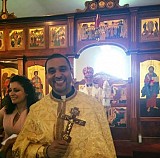 Dn. Paul Abernathy (STOTS Class 2010) was ordained to the Holy Priesthood on Saturday, August 27 at St. George in Bridgeville, Pennsylvania. He was ordained by His Grace, the Right Reverend Thomas (Joseph), Bishop of the Diocese of Charleston, Oakland, and the Mid-Atlantic, of the Antiochian Archdiocese.  Fr. Paul was ordained in the same parish where he was received into the Orthodox Church.  There were 18 priests and deacons present during the Divine Liturgy and ordination.  Fr. Paul served his first liturgy at the Mission of St. Moses the Black in the Hill District of Pittsburgh, Pennsylvania on Sunday, August 28. Axios to Fr. Paul and his family as he begins the next phase of his ordained ministry.

Dn. Basil Kuriakose (STOTS Class of 2015) was ordained to the Holy Priesthood on Wednesday, September 14th, 2016, at his home parish in Mumbai. He was ordained by his Diocesan Bishop, His Grace, Geevarghese Mar Coorilos (Metropolitan, Diocese of Bombay, Malankara Orthodox Church). Axios to Fr. Basil and his family in India!  (Photo is from diaconate ordination.)