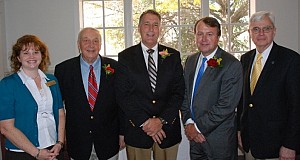 Dr. Eli Stavisky, a 1961 Lycoming graduate and STOTS Board of Trustees Member, received the "Angela R. Kyte Outstanding Alumnus Award," given in honor of an alumnus who has demonstrated a lifetime of service to humanity and whose life exemplifies those qualities encouraged and fostered at Lycoming and by its predecessor institutions.

Stavisky is retired from practice as an oral and maxillofacial surgeon. He is a recipient of the Pennsylvania Dental Association Annual Award and has served as chair of the State Board of Dentistry and member of the American Board of Oral and Maxillofacial Surgery and the American Association of Dental Examiners, among many other organizations. He has been inducted into the American College of Dentistry, which he served as president, as well as the International College of Dentists. As a member of the Free Dental Clinic of the Jewish Federation of Scranton and the Pennsylvania Board of Directors of Donated Dental Services, he donated countless hours of his career and was one of the few oral surgeons in Northeastern Pennsylvania to treat Department of Welfare patients. He earned a bachelor’s in biology from Lycoming, where he has served as a member of the Alumni Association Executive Board, and a doctorate of dental surgery from Temple University. He completed his post-graduate work in oral surgery at the New York University College of Dentistry. Stavisky also served as a captain in the United States Air Force and was chief of oral surgery at the base hospital in Plattsburgh, N.Y. He and his wife, Paula Ovens, live in Clarks Summit, Pa., and are the parents of three daughters.

(Dr. Stavisky stands second from the left in the photo.)

The full story can be found here.