His Grace, Bishop JONAH of Fort Worth Elected Metropolitan of All America and Canada
AXIOS! AXIOS! AXIOS! 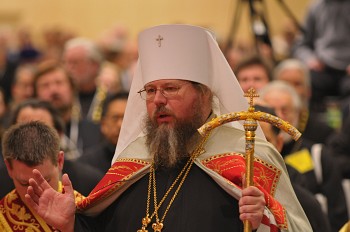 On Wednesday, November 12, 2008, His Grace, Bishop Jonah of Fort Worth was elected Archbishop of Washington and New York and Metropolitan of All America and Canada at the 15th All-American Council of the Orthodox Church in America.

His Beatitude, Metropolitan Jonah was born James Paffhausen in Chicago, IL, and was baptized into the Episcopal Church. While still a child, his family later settled in La Jolla, CA, near San Diego. He was received into the Orthodox Church in 1978 at Our Lady of Kazan Moscow Patriarchal Church, San Diego, while a student at the University of California, San Diego. Later, he transferred to UC Santa Cruz, where he was instrumental in establishing an Orthodox Christian Fellowship.

After completing studies at UCSC, James attended St. Vladimir's Seminary, graduating with a Master of Divinity degree in 1985 and a Master of Theology in Dogmatics in 1988.

He went on to pursue studies towards a Ph.D. at Graduate Theological Union in Berkeley, but interrupted those studies to spend a year in Russia.

In Moscow, working for Russkiy Palomnik at the Publishing Department of the Moscow Patriarchate, he was introduced to life in the Russian church, in particular monastic life. Later that year, he joined Valaam Monastery, having found a spiritual father in the monastery's Abbot, Archimandrite Pankratiy. It was Archimandrite Pankratiy's spiritual father, the Elder Kyrill at Trinity-St. Sergius Lavra, who blessed James to become a priestmonk. He was ordained to the diaconate and priesthood in 1994 and in 1995 was tonsured to monastic rank at St. Tikhon's Monastery, South Canaan, PA, having received the name Jonah.

Returning to California, Fr. Jonah served a number of missions and was later given the obedience to establish a monastery under the patronage of St. John of Shanghai and San Francisco. The monastery, initially located in Point Reyes Station, CA, recently moved to Manton in Northern California, near Redding. During his time building up the monastic community, Fr. Jonah also worked to establish missions in Merced, Sonora, Chico, Eureka, Redding, Susanville, and other communities in California, as well as in Kona, HI.

In the spring of 2008, the Holy Synod of the Orthodox Church in America elevated Fr. Jonah to the rank of Archimandrite and he was given the obedience to leave the monastery and take on the responsibilities of auxiliary bishop and chancellor for the Diocese of the South.

Bishop Jonah's episcopal election took place on September 4, 2008, at an extraordinary meeting of the Holy Synod of Bishops. Earlier in the summer, his candidacy was endorsed by the Diocese of the South's Diocesan Council, shortly after Bishop Jonah had participated in the diocese's annual assembly.

Bishop Jonah was consecrated Bishop of Forth Worth and Auxiliary Bishop of the Diocese of the South, at St. Seraphim Cathedral, Dallas, TX, on Saturday, November 1, 2008. Consecrating hierarchs included His Eminence, Archbishop Dmitri of Dallas and the South, Locum tenens of the Metropolitan See; His Grace, Bishop Tikhon of Philadelphia and Eastern Pennsylvania; His Grace, Bishop Benjamin of San Francisco and the West; and His Grace, Bishop Alejo of Mexico City and the Exarchate of Mexico.

Metropolitan Jonah will be installed by the OCA's Holy Synod of Bishops at St. Nicholas Cathedral, Washington, DC, on December 28, 2008.

May the Lord bless His Beatitude, Jonah, newly-elected Metropolitan of All America and Canada with many years of fruitful service in His Holy Vineyard.